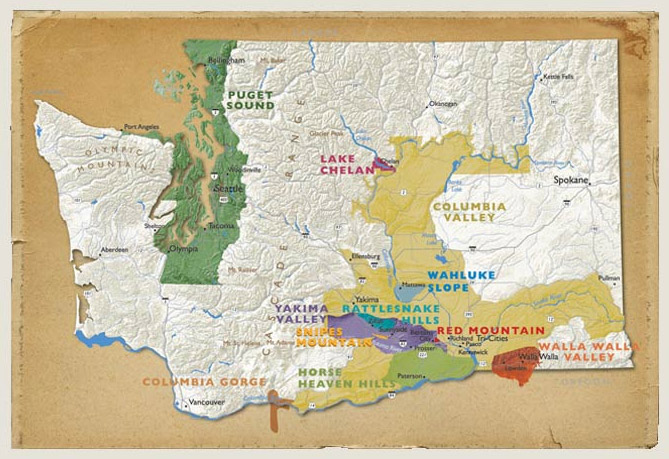 "...there's no doubt in my mind that for Cabernet there are vineyard areas in Wasington that are the greatest on earth." --Pierre Rovani

The most important factor in making great wine is the terroir of the vineyard and one of the primary elements of terroir is the soil. The history of the vineyard soils in the Columbia Valley of Eastern Washington is a fascinating one. They are the effects of the Ice Age floods that occurred 15,000 to 20,000 years ago. The below story is summarized from an article by Andy Perdue in the Fall, 2005 issue of the Wine Press Northwest magazine.

At the end of the Ice Age, part of the Cordilleran ice sheet crept south down into Idaho. This lobe of glacial ice blocked the Clark Fork River creating Glacial Lake Missoula that covered western Montana. Eventually, this ice dam failed setting loose a 500-foot-high wall of water that swept southwest across Eastern Washington at 60 mph. These floods were equal to 10 times the instantaneous flows of all the rivers in the world combined. After this first dam broke, the glacier continued its march south, repeating the entire process of temporarily blocking up the river then bursting to flood Eastern Washington another 80 to 100 times every 50 to 75 years. Each time, more gravel, sand and silt was washed south, shaping Washington's wine country. Since the end of the Ice Age, wind has continued to shape the landscapes of the Columbia Valley by adding a top layer of sand and silt to create the perfect terroir for premium wine grapes.